British titles were at stake last weekend in the thundering surf at Fistral. Jayce Robinson and Harry De Roth were there presenting St. Ives’ challenge for the crown, with Jayce seeking the added bonus of taking the UK Pro Surf Tour title as well. He needed to produce a better performance than leader Alan Stokes to snatch the title at this last event of the tour. The surf was monstrous and messy. The proposed running order was changed to put the Mens Open in the water first, and heats were extended to 25 minutes with a 10 minute paddle-out to give the competitors a chance of finding two good scoring waves. Round One was completed and the contest director moved straight to round two, deeming conditions to be still too challenging for the Masters, the Seniors. the Veterans or the Ladies. Harry had won the opening heat of round one, and proceeded to do the same in round two. Next heat featured Stokesy, and he had a shocker. He was eliminated from the competition, and Jayce, who was already out back for the next heat, could win the tour title by progressing through the heat – though he had little chance of knowing Stokesy’s result with the howling gale making the PA commentary unintelligible from the water! However, he duly won the heat and learned the great news when he returned his vest to the beach marshall.

Competition resumed in slightly lighter surf on Sunday afternoon with Harry up in the first semi final. He was again in good form. holding first or second place to the hooter, only to be beaten when the final scores dropped after the surfers were coming back up the beach. He and Micah Lester had tied for second, with Micah progressing by virtue of having the highest first wave score! 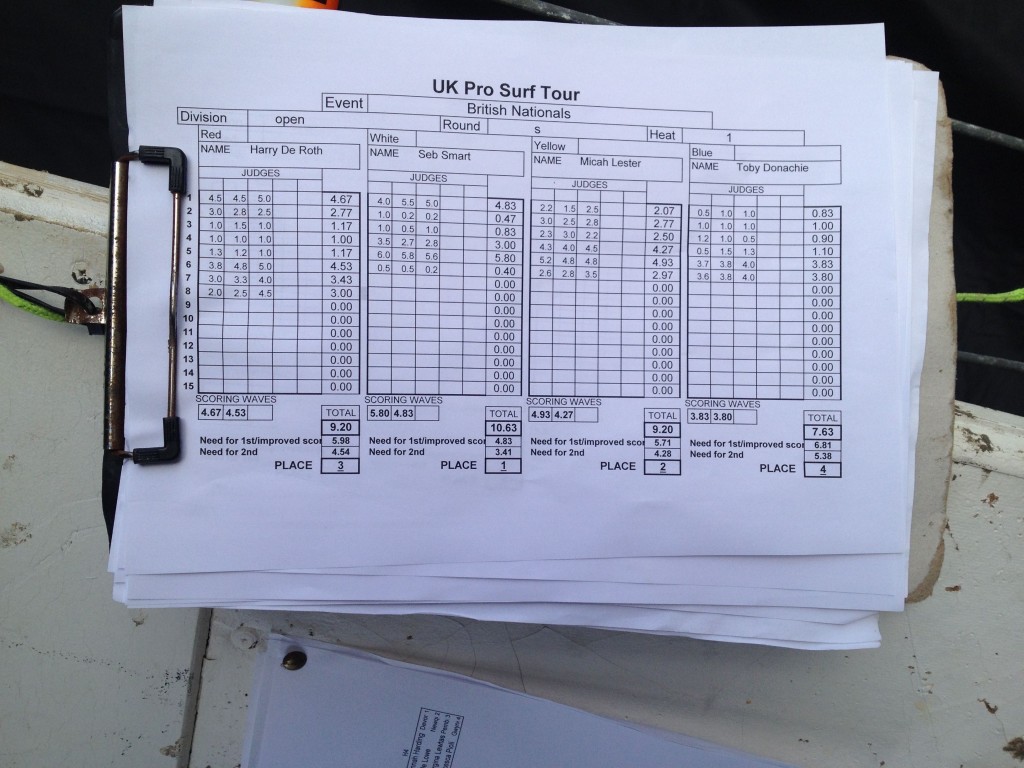 So near and yet so far!

In the second semi final, Jayce wasn’t to be denied, and he took that winning vibe into the final where he pushed the competition’s in form surfer, Sennen’s Seb Smart, into second place to complete a great weekend’s work.

In fact, it completed a great season’s work, as Jayce has achieved the phenomenal feat of claiming the Triple Crown of English, British and UK Tour titles in a single season. Brilliant! You can see the champ in action at Porthmeor whenever there’s surf – though you’ll have to wait until he and the surf school crew return from their RnR trip to Bali from this weekend! You’ll agree with me, I’m sure, that Jayce, Harris and the boys have earned their tropical surf holiday this year!